More From the Far Field of Winters

Two emails in four days! Readers will remember that our poor wayfarer has just left a temporary job and is now on the lookout for another such, and is currently staying with friends--or family, we can't tell. We wish we could say that, based on the clues presented here, we can fix our traveler's location, but we cannot. The aunt and uncle he refers to could be anyone. His outlook seems to remain good--nothing about the "groping limbs of darkness" we have heard about before. And he still has a sense of humor.

I think I must be getting less interesting. Last night my aunt and uncle took me into their living room because they wanted to discuss something important with me.

My aunt did all the talking. She said they didn't know what my plans were or what I intended to do and I said that made three of us. She said she was glad I was there in their apartment and was welcome to stay as long as I wanted--though she of course would take no rent. She said wasn't it true that I really only wanted freedom and no close connections with anyone, at least not now, and I said yes, absolutely true. Then she said I was a puzzle and she was going to figure me out, as if she hadn't just articulated the very key. She said she'd assumed I would stay awhile in _____ and take up the pursuit of a teaching job, as I had before confessed to something like an interest in that, and because I was getting to be that age where if I weren't careful I could wake up an old man in a rescue mission and have no regular income. I said aunt I'm already there. She said what I needed was a regular job and a regular woman and a place to settle down, as a man needs a home and family and what did I think of that. I said I agreed completely that a regular job, woman and home would suit me fine provided my objective were neverending despair, as that had basically been the lesson of my last 20 years. And she said there was nothing wrong with teaching and I said no there wasn't. My uncle watched the ceiling. She said I had never had any career, never posted any achievement, and I said, well, yeah, probably 15 years in newspapers and 20 as a professional writer is not really a career, and those travel- and feature-writing awards don't seem like any great shakes at this point. At the time I was inclined to regard them in the light of a recognition, but I see now I was being unreasonable.

She looked at me blankly. She said a teaching job would give me a regular paycheck and I'd have all kinds of time off. I said I have all kinds of time off now. She said I'd get a pension and live my last years in comfort and I said I have never had comfort in my life and didn't expect to want any. Where's your retirement plan, she asked, and I said at present it consisted of jumping off a bridge at age 72, which she did not find humorous in the least.

Eventually she lightened up and seemed to be satisfied. We parted as if we had eached a crucial decision, and if we did actually decide something I hope to find out what it is before I'm supposed to deliver on it. I'm afraid to tell her I want to go to Florida in January. I'm afraid to offer to pay rent again because she'll say no, and I'll feel like I'm imposing.

So there are my last few days. I'm sorry for this recitation but I thought you might find it funny. It says no fine thing about me that I do.

Posted by The Fighting Shy at 2:46 PM No comments:

We have received further communication from Winters, that far-away and wide-scattered writing friend of ours. As usual it's another fragment of diatribe, there is no telling what prompted it. The writing begins without explanatory preamble, and no other enlightening detail comes through to us, neither a return address. He speaks chumily enough, and though we learn nothing of the identity of his correspondant--could it be us?--something of the warmth we used to know in him, the passion, and certainly the earnestness, illuminate the page. He seems to be speaking to some far gallery, though on a topic best dicussed in whisper. Such is the paradox of our friend--one of the paradoxes.

Somewhere along the line I came to the conclusion that those things I yearned for, in the first place would not provide the solace and security I sought, but in the second place were positively bad for me. The yearning for a steady woman and steady job, for example. I almost had these things many times. Yet with every approach to their proximity, I felt shades of the prison house closing down around me, and withdrew. Withdrew with some vehemence, I say, despite the difficulty. Getting out of a full-time job was the hardest thing I ever did, followed closely by staying out of a full-time job. Getting out of not one but many close associations with woman--who cannot guess the pain of that? But always the yearning, always the looking for surcease of restlessness. Some day I would find it.

I sought it in writing. Early on, writing looked enough like a worthy dream that I chose to follow it, and follow it I did. Follow it through staff jobs, freelance jobs, my name in great publications and small. And yet for all the good it did me I might as well have been digging ditches. Not fortune did I earn, nor fame, nor reputation. Nor even did I acquire a marketable advantage by it. For writers fall from the very sky. You can pick writers out of the trees with a slingshot. Without even touching the ranks of those who truly earn livings at it, there are many--millions--who style themselves writers, though their firmest achievement be but a grocery list. And more are born every year. Among these multitudes I was one, and not a very noticeable one.

Thus did long association with the dream, that foolish hobgoblin, prolong my suffering. But there were other dreams, each embraced with vigor and abandoned, sometimes many years later, with despair. So many others, indeed, that at last I came to suspect the yearning itself was at fault. Never would I stand in that sunny meadow of complete comfort and security. The perfect job would never come, the perfect woman would never show up. It was all going to be a long series of makeshifts and compensations. What was more, the best guide for behavior was not going to be that deep yearning any longer. It would inform, perhaps, but not guide. It would be one voice at the table, not the only voice, and its judgments would be scrutinized more thoroughly than most.

Just as women--allegedly--seem to often fall into that syndrome of looking for the prince, the man who will make everything all right, so do men frequently subscribe to the delusion of airtight job security, profound repose and reward, which the right work will confer upon them. The right work will save everything.And yes, it may be that the spouse will save everything for some men. How many people of both sexes, but men especially, invest that hope with every succoring and redemptive notion their spirits are capable of. If only they could get the job right, if only they coul find the right spouse, everything would be satisfactory. And yes, there seems to be a strong parallel between the delusions of perfect man and perfect work. The right job will fill that gap in a man's life, the right man in a woman's. But there is certainly overlap, as I myself am witness. I despaired of finding the job that would make the dark places light, and when that failed I despaired of finding the woman who would do likewise. Neither of them existed. Both were the creation of fear and imagination. And so we might indeed guess that this desire itself, this quiet subterranean yearning for the all-inclusive solution to our anxiety, is to blame for much fallacious behavior. Let us call it something perky and memorable. Let us give it a handle--the better to throw it out the window with. Let us call it the Sunny Meadow Delusion, and let us learn to beware of all the sunny meadows in our dreams.

Posted by The Fighting Shy at 1:09 PM No comments: 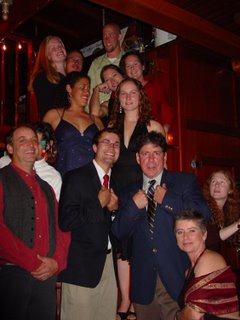 Weird stuff has been going on since I last wrote. My fiance and I split, I returned to my third summer as a sailboat captain in the Chesapeake, then found a job on a schooner when that job ended. Now I am a deckhand on the schooner Virginia, based in Norfolk. I haven't done much writing and haven't missed it. Writing may turn out to be a fool's errand, I'm not entirely sure yet. Anyway, here's a picture of me and the rest of the crew from the schooner. Their website, by the way, is schoonervirginia.org. Wish us all luck, eh?

Before I go, one more picture. This one of me and one of the best sailors aboard. Here we're striking an angry pose to represent our working relationship. 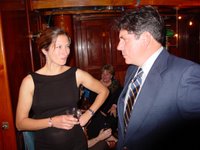 Posted by The Fighting Shy at 8:20 PM No comments: