Students of the Gale

Last week we took a week-long voyage to Catalina, though as with many of our voyages, high winds modified our plans. Instead of staying a week at the island, we returned to the mainland early and anchored off Long Beach for several nights--a frustrating decision but, given the swells we'd have to sleep on at Catalina, a good one.

We still managed to sail the daylights out of the boat. On our next to last day, Captain Steve Peckham, whom no one will ever accuse of cowardice, chose to exit the Long Beach breakwater and sail into the open Pacific with 10-foot swells and a constant wind of between 30 and 40 knots.

He did it with too much sail up, I thought, given the wind, but if anyone knows what the ship will bear, Peckham does. It was no surprise to me when the first 40-knot gust sent the captain running around the deck screaming “strike the upper now,” while the crew scrambled about in mayhem and the ship heeled way over and our high school students wet their pants.

I think he did it deliberately, for the adrenaline rush, but he denies it. For several hours we tore around in this maelstrom under reefed sails and damn few of them, water breaking over the bow and the masts creaking and popping and the seas tilting one way and another around us, and some of us on the top yard furling the wild sails and hanging on like leeches.

Up in the rigging you sometimes aren’t looking down, and so see nothing of the pitching and rocking of the boat. But you’d better believe you feel it up there, as if barrages of invisible force were thrusting you first forward and then back, first against the shrouds you’re hanging on to and then away from them. You learn to hold on with your eyelids. The students I took with me were exhilarated.

Somehow your response to all this throwing about passes beyond fear and goes right into giddy laughter, and the wild shout of the rodeo rider. I have seen the deck of a pitching boat erupt in a perfect riot of laughter. My own little crew of high schoolers—after I challenged them not to scream at every rising of the bow—turned immediately into a party of the most gleeful and concentrated little sailors I have ever seen on this boat. They hauled on their lines with an absolute crowing confidence, as they realized they were equal to this weather.

And they were. Next day after a calmer sail we got back into the harbor and the trifle of wind that manages to get in through all the cranes and hills and illegal immigrants. The students didn't want to leave. Neither do I.
Posted by The Fighting Shy at 4:26 PM 2 comments:

Sure, it’s a great thing sailing out Angel’s Gate to see dolphins, seals, the occasional whale. Given enough time, even the sound of kids puking assumes a consoling and reposeful tone, a reminder of the cycles of nature. Kids sail, kids get sick, kids feel better, everyone starts to enjoy themselves. Every sail, every outward course, every billowing of canvas against the smoggy sky, we have reason to be happy.

But things don’t really heat up until Captain Mike loads the cannon.

For a large part of this season the Exy suffered along with an ordinary salute cannon, the kind that mounts in one of the belaying pin holes and shoots charges the size of shotgun shells. This cannon, you’d better believe, about the size of a large rolling pin, can make some noise. It has become the custom here—whether from long tradition or spontaneous invention—to salute other sailboats as they pass us by making a very loud noise. This purpose our little gun answered pretty well, speaking out with a spirited bang, deep-voiced for its size, and satisfying in the utmost. Yet, some people felt we could do better.

Since I arrived here in December I’ve come to understand not only many points of seamanship that were mysteries to me before; I’ve also come to understand the purpose of lots of the junk lying in the supply cabin on the dock. For three months, while visiting this cabin for spare rope, varnish, seine twine and the like, I’ve been amused at the sight of the truly stupendous cannon piled into the back of the little house—obviously some kind of prop, maybe from a long-ago pirate party or something. But no. As I came to understand, this was no prop.

Somewhere or other, Captain Mike got hold of this weapon—or just the cylinder of it—because our basic salute cannon simply was not loud enough. Captain Mike wanted a Really Big Gun. He built the carriage and the wheels out of fiberglass, then painted the whole to look like the genuine wooden marine cannons of old, a very convincing job. Two weeks ago, at the request of one of my shipmates who had taken leave of her senses, Captain Mike gleefully consented to dragging this thing on board, and setting it up on the port deck as a permanent fixture.

So now, there it sits, its squat form filling the midships deck, its muzzle poking out with considerable menace toward the Ports O’ Call rest rooms. It would be scary enough if the thing didn’t actually shoot.

But it does actually shoot.

When this monster goes off, it consumes about a pint and a half of black powder per shot. This powder comes in black plastic bottles that look like those you buy when you need to add oil to your engine—one entire bottle per shot. The powder itself comes from Germany, from a company called—this is absolutely true—Schuetzen, as in “Ve now going to schuetzen zee cannon.”

The first time I heard it I didn’t actually hear it—everyone was covering their ears. Rather, I felt the explosion as a radical fluctuation in air pressure. I have read accounts of sea battles in which the cannon fire is said to stun the wind. Now I know what this means.

Now, no voyage is complete without at least one ceremonial blast from this gun. Usually the blast comes as we’re nearing home. The captain will get a look in his eye, my shipmate Amber will notice it, the powder will come out. Amber will shove a huge wad of powder down the muzzle with a loading rod, sprinkle a bit on the touch hole, then stand by with her slow match until a likely target comes into range. Everyone around the cannon puts on headphones. All the while Captain Mike will be quietly bubbling with joy.

Then the great moment arrives: Another ship heaves into view, I do my best to communicate to them via pantomime the concept of hearing impairment. Amber shouts “Fire in the hole” and touches her linstock to the touch hole. For just a moment the powder in the pan fizzes and pops while the flame works down to the main charge in the breech. And then….

We recently saluted the little town of Avalon, on Catalina Island, upon our arrival there. Avalon sits in a gentle valley running down to the water, and is in all ways a quiet and peaceful little place. When our cannon went off, with its godless and rock-shivering noise, it was as hell had split open at this precise longitude and god was saying “Time’s up for peacefulness.” The echo of that crash returned to us again and again, for many long seconds after the shot. I was surprised we weren’t immediately asked to leave the place, but then, one makes certain allowances for maritime tradition.

That is, sometimes one makes allowances.

Two days ago we decided we would salute the Irving Johnson just as she left her dock, squarely in the middle of one of the busiest commercial ship channels in the world. The shot sent up the hordes of seagulls on the dock, and probably deafened the customers at the fish market there, which was expected.

What was not so expected was, first, the radio call from the Coast Guard asking us what in God’s name was that noise, and maybe we should call them before shooting off a gun that size in the harbor; and second, the visit from the Los Angeles Port Police, who, no doubt after changing their underwear, hurried down to our dock and came on board and inspected the gun, and agreed it was a truly impressive gun, and right at home on board our ship…but perhaps we could call them before shooting it in the harbor next time.

So there it is. We are chastened in the use of our cannon, but not by any means gun shy. We don’t intend to become gun shy. Never say die while there’s a shot in the locker, is the old sailor’s adage, and I happen to know we have at least a dozen shots left. 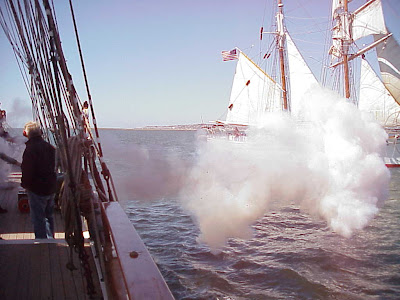