I get to the art school exactly on time and connect with the PR guy. I’m doing a story on what it takes to be a model. Doing research. I’ve heard of the great work that goes on here—they have 50 models on their roster--and maybe I can get some interviews. The very companionable PR man figures I’m ok and tells me to just look around. So I wander. And the first thing I see upon entering the next office is this.

This painting occupies a seven-foot height on the wall opposite the entrance. The room is none too deep, and none too large, and so the effect of sudden awareness of this figure is to be just about knocked over backward.

It was painted by Nelson Shanks, one of the great portraitists of the world and founder of the school I am visiting, and is now quite a famous painting. The jpeg can’t do it justice. In person it is rich, dynamic, subtle. It seems to breathe the very air you do. And, for me, it pretty much sets the tone for the rest of the day.

I manage to stumble out of that office and through the warren of rooms that houses this school. Along all the walls, in every room, around the very microwave in the break room: nudes, figures, dramatic forms, painted, inked, penciled, sculpted. Men, women, young, old, black, white, all shades in between. 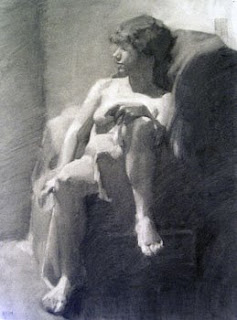 That’s what they do here, drill art students in the rigors of realist form. They call it the human realist approach and the training, designed by Shanks himself, insists on regular and repeated figure drawing with live models.

And so indeed, in the first studio I reach, that training is going forth. Arranged in a semi-circle are 11 students standing before some kind of erasable boards, slashing away in pursuit of the figure before them, a nude woman standing straight up with her hands held over her head.

The teacher is walking around the room with a digital timer saying “change please” every two minutes, whereupon the model assumes a new posture, possibly dramatic, sometimes clutching a long wooden shaft as if it were a holing tool, or an earth-stuck spear, or the walking staff of a Druid.

Students have only enough time to slash a few lines--and the teacher encourages this slashing motion—before the pose changes and the creations of the last two minutes are wiped away so a new figure may be drawn. Two minutes, two minutes, two minutes, pose, pose, pose. After which the model takes a 10-minute break, steps down from the dais in a silk bathrobe, pours some green tea from somewhere, and looks at me expectantly.

Many years ago I did a bunch of stories on the global phenomenon known as Nudism and its modern counterpart, Naturism. Talking to so many who took it so seriously, I learned by heart the boilerplate reply to the charge that used to come regularly at nudism—that it is just salaciousness given a kind of free-spirit, back-to-nature disguise.

No, said the nudists. There is no necessary connection between nudity and sex. We habitually read sexual meanings into plain nudity because nudity is thickly fretted round with prudish taboos. And because there’s a multi-billion dollar industry devoted to selling products through sexual titillation, which so often gets confused with nakedness. There are as many reasons to take your clothes off as there are to put them on.

I had reason to doubt the honesty of the nudist rationale, but not so with the artists. If artists have been drawing nudes with any sort of lubricious intent, they have at least the legitimacy of a several-thousand-year history of doing so. I have heard not a single salacious word on life studies from any artist I’ve ever met.

So I ask the bathrobed woman standing next to me.

No, posing like this has nothing to do with sex, she says. She’s an artist herself and has drawn dozens of figures, scores. Drawing figures trains the eye in recognizing physical structure; if you never draw another nude, you'll still draw a better human shape in any guise. As for modeling, it’s a good job for an artist. She used to wait tables and then hurt her foot and was unable to dash around and this seemed a good alternative. 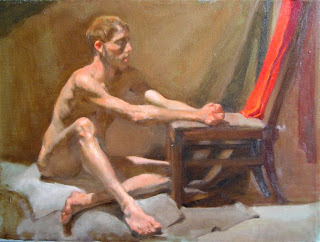 There’s a kind of athleticism to it, and you think about varying your poses, and putting your weight in different place each pose. You have to concentrate, but sometimes you can let your mind go blank. She guesses you have to be comfortable with your body, though I’m sensing she has never thought about these matters before, as none of the models I have interviewed have thought about these matters before. 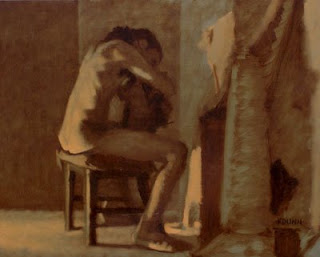 In the break room, where I stumble as my wits begin to falter, two young woman students greet me with their names and try to explain why they study here. Did someone tell them I was coming? One of them, an Asian woman speaking perfect English, I cannot follow to save my life. She is trying to contrast the pedagogy practiced by this school and the one she attended previously, but at the first mention of the word “formalist” I am lost. And so I continue to nod vigorously and this is okay because she speaks for 10 minutes without taking a breath. And I’m wondering if she will disrobe when she stops.

While she’s speaking, a little blonde comes in wearing a bathrobe, to get a drink of water, and I realize there are three studios with naked people in them that I haven’t even seen yet. Then the conversation ceases because time has been called and the poses are resuming.

I wander into another studio, where a man is posing on a chair, and into the third studio where the little blond is draped over another chair. By this time I’m so addled with all the friendly helpful nudity that I have to stand outside on a balcony for several minutes breathing deeply.

Finally I get out of there and drive to my well-remembered hot dog stand by the main branch of the library, and how wonderful to be in this familiar place again, with so many people around, a big American City. But something unusual is going on. Everyone on the street is beautiful. Everyone on the street is beautiful. They seem to all understand they are like walking works of art. And I’m thinking, maybe I should go to art school, if only to become less of a cynic. 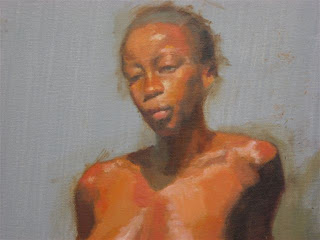