Water is an expansive element, but not so expansive that you don’t run across old shipmates once in a while. In California I re-met Josie, from the Virginia, and Emily (another seafaring Emily) from the North Wind. Last week I went only 20 miles out of my way to meet another old Virginian, Bill Ryall, who’s found the most ununsual boating job I’ve heard of.

At the Ruth Parker Marina in Tappahannock I found him, and the other 11 boys and girls now sailing the John Smith Shallop around the Chesapeake. They embarked in May, seven boys and five girls, in a 25-foot hand-made wooden boat carrying both sails and oars, on a three-month tour of Chesapeake Bay. They are re-creating the trip made by John Smith, the founding buccaneer of Jamestown, some 400 years ago. Smith put out from Jamestown in the summer of 1607 with seven other swashbucklers in a boat very much like the one Bill is now sailing, to survey as much of the bay and its tributaries as possible. The recreation voyage is attempting to retrace that voyage, with a few small variations, which produced the first reliable chart of the Chesapeake, a chart that guided captains around its beautiful and shoal-bedeviled waters for a century afterwards. 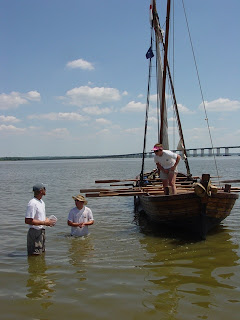 Ever loyal to his maniac impulse, Smith scoured the Bay to its limits. His expedition reached the fall line of every major tributary and many minor ones, including the Elk and Susquehanna rivers, far to the north, and never turned back until further passage became impossible. He mapped the locations of dozens of indian villages, and hundreds of natural formations.

The voyage itself never found much space in school history books, strange to say, but Ryall and crew may change that. The idea for this trip took shape at the same time something called The Captain John Smith Chesapeake National Historic Trail was coming up through Congress. This trail, authorized by Congress in December, 2006, will be a kind of national park laid out along Smith’s route—for what can you not designate a national park if you really want to?—and will essentially put parts of Chesapeake Bay under federal protection against all manner of inimical forces, such as development and overfishing. It will also provide a focus on “appreciation of the resources associated with Smith’s voyage,” and offer new opportunities for education, “heritage tourism” and recreation. Interpretive kiosks will line the route, along with “interactive buoys,” whereat boaters may drink of rich historical knowledge on local land and seascapes, and here presumably interaction means something other than collision.

Since May, they have rowed, sailed, or drifted along on the tide for at least eight hours a day, with very few days off, stopping in the evening for a fitful night’s rest wherever they could find a friendly wharf. They have covered as few as five miles and as many as forty miles a day. They have rowed through rain, thunderstorms, chilly dews and brutal heat, sunburn, fatigue, bodily indisposition and hunger, and kept smiling about it. They have passed out on beaches, marshes, docks and coastal woodlands, napped under clusters of bushes, slept the night in tents hastily put up near their boat, all the while keeping up a happy appearance and trying not to kill the people they live with and can’t possibly get away from. Their boat offers no shelter from the elements. They have clung fast to their brisk schedule. One or two of them look tired. 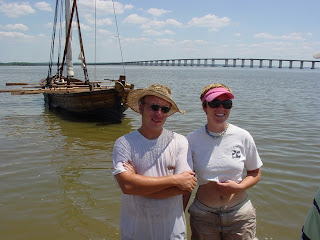 Not even this non-sailing Sunday can offer them much respite, but they must rotate through their shoreside stations, to answer questions for the visitors, staff the exhibition tent which accompanies them to every scheduled stop, wash each other’s clothes and prepare food. It’s a bright and prismatic day in Tappahannock, a cool relief from the head-breaking heat of the previous week. The Ruth Parker Marina occupies a wide strip of weedy sand between route 17 and the river, running from a gravel parking lot near the highway to a narrow beach at the waterside. The shallop rests about 15 feet off the beach, its nearness a testament to the usefulness of this craft: she draws less than two feet, and can go almost anywhere. Crew members slew her about as needed, push her further out in water barely up to their waists. Yet this 25 feet of hand-hewn timber is their home.

I try to think of questions Bill hasn’t heard yet, but he answers the one he usually hears before it’s asked.

“A bucket,” he says. “Just one bucket for everyone.”

“Boys and girls both?”

He nods. “Of course,” he says, in a Beatles-like inflection (he grew up near Liverpool), “we try not to drink too much coffee, too much of anything, before we get started.”
Posted by The Fighting Shy at 12:20 PM 1 comment:

A Week on the Corrotoman and Rappahannock Rivers

Our last week was fantastic. It's always great to have enthusiastic adults, but to have enthusiastic kids is the best. The week started with lots of rain and we got underway late on Monday, but caught some good wind several miles downriver and rode to Deltaville on it. Tuesday the wind came strong straight out of the south, so instead of the familiar swimming hole we put her head east and set out across the Chesapeake. We got pretty far, a bit better than halfway, about 11 miles out, far enough to have nearly sunk the land behind us and just raised the land before us. I had programmed a waypoint called Bikini Island on the GPS, located somewhere near our line of travel, to keep my crew interested, but I cautioned them that only the pure of heart could see it. It's probably good they didn't take me seriously. Anyone promising real bikinis to teenage boys had better deliver.

And all this time I'm starting the Perkins with a hammer. Every time that engine had to start, I had to use the hammer. It was yer basic sollenoid failure, the telltale click at the turn of the key and then nothing. Batteries good, fuel tanks filled. No grinding, just a click. But of course anyone who's been around diesel engines knows the trick of arcing the sollenoid with a piece of metal. Just line the metal along the two critical contacts and whoosh! Sparks fly out, the air crackles with electric fire. But then the machine engages and the motor starts. For three weeks I'm doing this, pressing the head of the hammer between the two contacts. My crew is calling it the Hammer of Life, and take pictures of it. It is one severely lacerated hammer. Meanwhile, two separate shops are bloodhounding a new starter for me.

Wednesday sailed to Urbanna, our favorite port. Here the kids lit out immediately for the ice cream shop, where, being scouts, they enjoy a 10 percent discount. Some go to the pool in town where, being scouts, they get in free. A few trudge all the way to the grocery store on Virginia Street, where they buy a truly astonishing amount of sugar in the form of Hershey's cookies, Little Debbie Snack Cakes, Mountain Dew, many kinds of ice cream and of course candy bars. That's just the sugar. The salt comes in its own varieties. The parents hit the Virginia Street Cafe and struggle heroically not to order a dozen cold ones. At night, a funny movie in the air conditioned captain's lounge.

Thursday, we arrive at Yankee Point Marina on the north side of the Corrotoman River, a tributary of the Rappahannock--and my starter has arrived before me! Another movie at night and all our remaining food for dinner: chicken, pork chops, peas and carrots, flour tortillas, steak strips, shredded cheese--anything we can't save till next week, which is almost everything. Friday morning after Brian installs the starter we can't resist starting the engine several times just for the joy of it. Everyone agrees the new starter speaks in an earnest and confident tone.

But we only need to use it twice. Once to get us off the dock and then again to put us into the slip at Bayport. Between those two uses we sail, we sail, mostly with the spinnaker, mile upon mile, the great sail billowing colorfully overhead and the Morgan chasing after it like love itself, the scouts taking turns flying behind us on the water by hanging on to the swim ladder. One of the scouts loses his shorts to the rushing water--I warned them--but manages to keep on his boxers. We sail 10 miles to Bayport and then a good two miles beyond, making the day last as long as we can.
Posted by The Fighting Shy at 6:17 PM No comments: