In Search of the Clampet Mansion


The idea came to me as I drove past the Fox Studios Lot in Century City Los Angeles. Why not get on a bicycle and explore the area. Of course this looks obvious on the page. But in Los Angeles the only real obvious mode of exploration is by automobile. I wanted to change that. I would conceive, plan and execute a trip around Century City and Beverly Hills by bicycle, which would forever afterwards redound to my personal credit, or perhaps redound to my esteem, or redound to the fascination of Los Angeles, or redound somewhere. It would be redounding long after the bike was packed away and the parking tickets paid.


My reasoning: Whereas Beverly Hills, Century City, Culver City and surrounding neighborhoods constitute a delight for the eyes and a temptation for the purse, they ought to be enjoyed even if you can’t live there.
Therefore, I would explore those places by being in them, using my bicycle as a vehicle, stopping frequently wherever interest struck or whenever confronted by an aggressive character. I would visit Beverly Hills and Culver City and other such places as the map might suggest, with no purpose in mind except to be there and be awake.

Possibly the less said about nerving up for this adventure the better. From the outside it looks like no adventure at all. But I appeal to the candor of the reader: What foreign and uncomfortable thing do you regularly take up and execute, even knowing it might benefit you in the long term? How often do you break the habit of what has become comfortable?

Having learned how to map out rides and many times reliably followed my own routes as loaded into my trusty GPS, and returned to my starting point, and avoided injury, I laid down a route to take me around Beverly Hills. I laid it out in a square, starting from Fox Studios, then north to Rodeo Drive and the Will Rogers Memorial Park, then west to the Playboy Mansion, then south toward Century City and my car.

The first part, driving there with my bicycle on the back of my car, caused anxiety. But really, how many potential travelers demur from travel because they worry about parking. Just go. The truth is, almost anywhere you go you will find space for your car, especially in America, especially on a Saturday during a national quarantine.

I parked on Motor Avenue in Cheviot Hills, near the Fox lot. I marked my parking spot on the GPS with the name Car so I could get back. I made sure to mark the location of the car, not like the last time I parked somewhere and accidentally marked the position of the cursor, which had drifted off center on my screen.

One of the many safety minded provisions of the Covid 19 quarantine is the ruthless closing of any facility that might be of use to those who happen to be away from home. These facilities include:
But near where I parked I found an open restroom, clean and tidy, and bless you whoever decided to overlook the edict on closing everything useful. When civilization goes down in flames, I am convinced, there will still be people willing to do the right thing.

North to Beverly Hills—actually to the ally running parallel to Rodeo Drive, with its multi-car garage buildings, shy dog walkers and super capacious trash cans emblazoned with the Beverly Hills crest—a cast off party hat lay on the street by one of them--and then over to Rodeo where it meets Wilshire, and becomes the storied Rodeo of high-ticket boutiques. 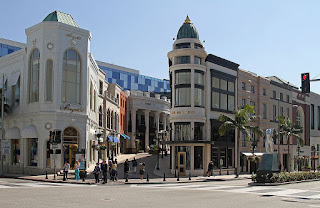 The Beverly Wilshire Hotel casts a great two-winged shadow over the intersection with its Roman arch and ornate stonework, its ground level lined with shops and a restaurant run by a Wolfgang Puck. Across from that is the Tiffany shop, above which a stone man holds a clock on his shoulders.

A freestanding sign in one nearby street rehearses, very politely, the measures California has taken to prevent contagion and that Beverly Hills requests those outside to wear face coverings at all times. Courteous. It’s got to say something important about a place when the signs are polite. Someone may find someday that the word please on public signage raises real estate values.

There’s no one around. And it’s really a shame these shops are closed, as I would like to do some shopping. One place called Agent Provocateur, whose window features mannequins wearing lingerie and climbing gear, seems especially appealing, as I cannot think of a more innovative way to scale a rock wall than in frilly underthings.

Actually it’s Will Rogers Memorial Park. A plaque there gives this history of the park—it was once part of the front lawn of the Beverly Hilton, became the city’s first municipal park in 1915, and took Rogers’s name in 1959—and names him indeed as a man who, through his fame and community spirit, got named as the first honorary mayor of Beverly Hills.

From there I go north along Richmond Avenue and plunge into a leafy residential neighborhood, which in Beverly Hills means something. Leafy neighborhoods here are not places where kids play in the streets but forbidding rows of mansions each sequestered in its security perimeter of tree-high hedges and trees in the form of a peristyle, the effect being of an impenetrable wall, but also a luscious landscape.

Everything about the houses is hidden, except the decorative stone bowls that jut at regular intervals sometimes out of the secrecy and into view. The Clampets lived around her somewhere; they must have hated this sequestration. 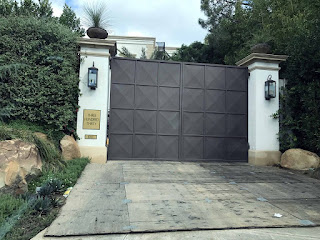 Then, suddenly, I’m on Benedict Canyon Road, which draws me off my regular path and north toward the hills. The name Benedict Canyon is familiar enough that I know I should follow it. More mansions pass. This is what happens when you ride a bike in Beverly Hills: you begin to understand that the Clampet mansion must have been much smaller than they made it seem on TV.

From Benedict Canyon I take a slight detour onto Shadybrook, and from there I get onto Cielo. And now I know what sounded so familiar about the streets I have been riding. Cielo was the street where one of the Manson murders took place. It’s not a big street at all. Is it my imagination or does every house within half a mile have a high-security fence around it?

For a moment I think I recognize the house from books and news reports of that event, but only later do I research and learn the house was demolished long ago, and occupied its own private lane anyway. Just as well. I can think of a lot better things to be mesmerized by than the site of a mass murder.

I continue up Benedict Canyon for several miles to where it executes a hairpin turn and trails off in an unwanted direction. Here, my self-assigned point of turn-around, I set the front wheel downhill and push off, beginning a long, gentle, roll downhill at a constant 14 mph, along the hillside cottages and mansions that have made this street famous.

A gray haired man on a bike and in full rider regalia wishes me good morning at a stop sign, then jolts up ahead into the distance and disappears. Good morning, he said, the lingua franca of basic courtesy, a sign of good breeding, which not even yet has come under attack by the enforcers of lowest common denominator. Maybe this is where I belong.

Certainly it’s very white, very waspy, very clean and upstanding, which I know would get under my collar soon. But a nice place to visit: Wondrous Wasp World, the best possible outcome of all those niggling mores that you usually can’t stand. But isn’t it such a wasp way to hate what makes you strong? Might there be a Norma Desmond out there for me? 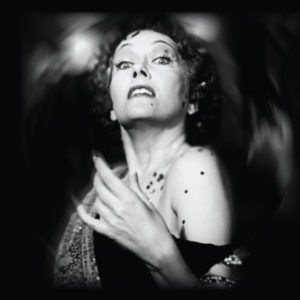 Back in town and then out of it again, this time to the south, I fetch up in Holmby Park, another outdoor locale which by God’s grace and someone’s oversight remains open to all comers. And there we all sit, on a luscious close-cut green sward of a lawn, each group beneath its own tree, enjoying the cool shade while watching the lambent sunlight. I could stay here for days. This place is not so much rich, though it is that, as confident, complaisant, powerful, a necessary concomitant to rich, a big brother to rich.

And then, on the bike once more, around Playboy Mansion which I didn’t even see, no bunnies out front flouncing or bouncing or whatever bunnies do. The bunnies have all gone away, I fear, now that Hef is not there to feed them. And so on back to the car, which I reach in good order and without incident.

And that is that. I got nothing more from my day’s expedition than the knowledge that I must change my life. It’s also a good reminder to be grateful for the desirable things I have, because God knows I won’t ever get to live in Beverly Hills.

Posted by The Fighting Shy at 7:42 PM No comments: