The importance of finding Ernest

Ernest Hemingway came to Idaho first in the late 1930s, a guest of the developers of nearby Sun Valley Resort, then sporadically for the next 10 years, hunting along Silver Creek and the Sawtooth foothills. In the late 1950s he bought a house in Ketchum, and in 1961 died there, after two years reaping the rewards of a lifelong will to self destruction. The funeral was brisk, the burial local, the trout still ran and the geese still flew. But thus another place name went onto the map of literary reverence. 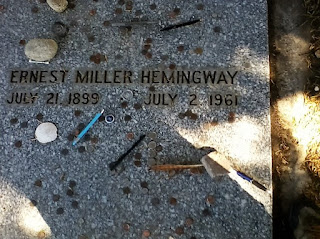 found his grave as easily as one finds the neat Ketchum Cemetery, near downtown, a gravely slab bearing his name and often littered with pennies and pens—which are in fact an error in the liturgy, for Papa used only no. 2 pencils. By such commonplaces is communion with greatness achieved.

But the city nowhere advertises his last house's location, perhaps fearing a swarm of Papa wannabes, an invasion of acolytes, an asphyxia of aspirants. It is left to the cunning, the clever, the calculating, to find his house on their own. It is left to those with access to Google maps and a disinclination to ask the owners for a tour. Thus:

It sits alone on a small hill, this house, as it did when Hemingway lived there, despite the dazzling wealth that has thrown up its idols nearby. It's sat empty for many years, the gossiping river running ceaselessly along its front, and is now maintained by the Nature Conservancy, who can't figure out what to do with it. 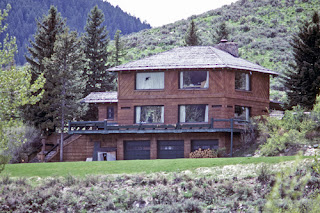 I got to its driveway, with all the No Trespassing signs glinting nearby in the sun, yet with obviously no one near who could threaten me with jail—and decided not to go the whole way after all. Hemingway was in deep trouble when he lived here: depression, paranoia, attempted suicide, great physical pain, shock treatments at the Mayo Clinic, alcoholism of course. He took the final step with both barrels of his shotgun in the foyer. I didn't need to see the place to know the story. And I think: Which is more worthy of reverence, the life or the work? And how much may they be separated?

To my friend Sterling I recommended an old Esquire piece by a guy who found himself on this same pilgrimage I was. Sterling came back at me angry that, in the piece, Norman Mailer gets to call Hemingway a coward. If I want to know Hemingway, Sterling says, I should read his short stories, The Sun Also Rises, the hunting scenes in Green Hills of Africa and any of his journalism.

“That writing is all that you need to know about Ernest Hemingway,” Sterling says.

Yeah, maybe. I wish I it was all I did know. And I wish that my reverence might someday learn to be careful.


Posted by The Fighting Shy at 3:08 PM No comments:

Sawtooth National Recreation Area. It contains mountains, it contains forests, it contains broad sweeping pine-blanketed plains rising curvingly up to white blasted crags blazing in the sun and rocky overhangs with snow on the upper ranges. And then miles after miles of sloping pine forest, lonely forests of trees, until you come to a lake, several miles off the highway and circled by a pavement, with clear opaline water and reflecting yet another stark asteroid of a mountain on the other side.

Every 50 or so miles, there is a little grocery and service station built of rustic boards, until you get to Stanley, pop. 258, where there is also a restaurant. In Idaho City, pop. 63, there are also genuine frontier storefronts with long wooden sidewalks before them, and a picturesque gold rush cemetery.

We started from Boise and rode 42 miles south, to Melba, toast capital of the west, then an additional 10 miles to a place called Celebration Park. My three teammates put distance between themselves and me, but we all flew along, with Idaho state flags flying above our machines.


The park, a state park, contained petroglyphs and other items of archaeological interest which you could view from a trail that wound among them.

The second day we followed an ancient still-elevated rail bed out of camp, across an old train bridge and on through the country until we reached the barbed wire barricade.

Advance notice of this obstacle, stretched defiantly across the right-of-way, had come to us before the ride in an email message from the route planner, to whom we swore left and right it would not hinder us a fig.

I had occasion to wonder at this certainty, as we handed our entire royal caravan—three recumbent trikes, a bicycle and trailer, 10 stuffed panniers, coats, helmets, cameras, water bottles, pumps, sunglass cases, all held aloft--over the dangerous wires and to a resting place further along the railbed as we shimmied and jiggy-footed trying not to stumble down the slope.

What we hadn't seen coming—what we had reason to believe would not come—was the screaming man issuing from his trailer down the way to command our immediate return from whence we came. He seemed to be quite agitated. He directed us to just turn around and go back, just turn around or we would go to jail. Clearly this was the biggest thing that had happened to him all week. From his trailer he began to make his way over the scrub toward us.

Now, this was not the time to debate the ascendancy of property rights over the needs of poor touring pilgrims like ourselves; nor did we think it quite politic to ask how any private person could own a railroad right-of-way. Or how we were supposed to effect a rapid escape with that barbed wire behind us. Or, for that matter, who he was and how was he able to throw us out. (Private property it may have been, I thought, but my attention is private also and he was trespassing on it.)

The thing to do, as Katie said later, is de-escalate. Kurt began this by assuring the man we were leaving, yes we were leaving, yes, leaving right now, just this minute. Meanwhile, the last of the party were joining us from the rear. Just turn around and go back, the man said, or you go to jail.

Yes, thank you, we are leaving.

We kept going. In the direction we had been going.

The man disappeared into his trailer, probably to get his gun. We were making steady progress down the road, which had become a driveway, a private driveway, upon which we were making highly illicit and probably immoral passage, toward the county highway just beyond. Four minutes later a frantic woman in a white Lexus came screaming up. She was slender and white and burning with the kind of rage that can only result from the secret belief that the world intends to destroy your flowerbeds.

Katie, the designated de-escalator, leaned into the woman's window and began emitting soothing tones. Her husband Mark stood by as diplomatic backup. Kurt and I watched. A minute later a 60-ish western-looking man went whizzing by on an ATV, trying to head us off at the pass.

More soothing sounds. In the car, the woman's voice had come down half an octave. She had grandchildren on those grounds she was saying, and they couldn't have just anyone going through. Sixty feet away Kurt rolled his eyes.

We got past that obstacle and down the road, down the long road. Night Two brought us, after a day of intermittent rain, to a state park called Bruneau Dunes which, despite this being Labor Day, was about half occupied. The park featured giant sand mountains that brooded over the little camp ground like a sky full of stars.

That evening we attended a lecture and slide show by a “UFO-ologist” in the park's observatory, and learned among much else that:

There was much more UFO information on offer, but Kurt and I fell asleep in our chairs during the last half hour. During this time it was obvious that Kurt's brother Mark was not in attendance, as we heard no one's head exploding, as Mark's would have.

Night Three, after another 60 miles: an empty RV park in Gooding, ID, where we slept amid the great empty cement pads designed to support large recreational vehicles.

Night Four, after yet another 60 miles, we got back to civilization again, to Hailey, where Mark's daughter and son in law fed us, slept us, and got us warm again. At dinner I announced complete satisfaction with my riding so far, and therefore my intention to quit here and remain satisfied with myself, rather than to become angry or frustrated or, perhaps, dead. Hailey had been planned as one of the possible quitting spots, so this was no problem. And Kate was also quitting here to go visit a new grandchild. I would ride one more day with Kurt and Mark and then return alone to Hailey the following day.

And so it happened. Three of us rode next morning to a campsite called Easley Hot Springs, and there spent a pleasant evening fretting about bears and hoisting our food into the trees; and next morning it was 27 degrees and my toes were frozen together.

This and a swelling achilles tendon brought home the wisdom of leaving early. Kurt and Mark continued on for another hundred miles, most of it uphill—I met them later near Idaho City. Meantime I rode downhill back to Hailey, stopping along the way to take pictures of trout streams and mountains.

So there it was: 311 miles in six days. Nothing for some folks but at least respectable for a cripple and invalid. 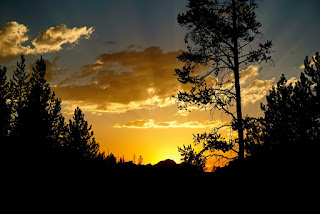 Posted by The Fighting Shy at 3:04 PM No comments: