In the Land of the Lucky

NO ONE should come to Los Angeles unless he is willing to be lucky.

Probably the most interesting thing about creative Los Angeles—Hollywood, let us call it, the collective manufactory of illusion spread among the hills of southern California--is indifference to its own celebrity.

Popular culture has been remarkably unexalting of the place. It has failed to exalt itself. Nowhere do we hear of Los Angeles the toddlin’ town, or wish to give our regards to Sepulveda Boulevard. In no nursery rhymes do children learn of the Thomas Vincent Bridge falling down. No lines form to see the changing of the guard at the mayor’s residence.

Nowhere is sung the pride of Los Angeles the city, perhaps because the city is not pretty, this sprawl of development larger than the Republic of Ireland, spread across foothills of sandy rock. The attitude of most Angelinos seems to be one of apology--for the smog, the traffic, the odd characters who populate its streets, the ubiquity of fabricated plastic.

Los Angeles is uncomfortable with scrutiny from the learned states of the east. Meanwhile its work has changed the world.

Since 2005 the global entertainment and media industry has grown at the rate of about 7.3 percent a year. By 2009, this uber-factory of songs, movies, television, video games and advertising is expected to produce revenues of nearly $2 trillion. The death of movies foretold so many times has proven unprophetic to the utmost. Online distribution of games, movies, music, and entertainment objects of vague definition has put rockets on the entertainment market.

The worldwide appetite for online entertainment services--Internet TV, video on demand, music downloads, games, gambling and adult entertainment--will reach $36 billion in 2009, a three-fold increase over this year. Most of this increase in production will take place in Los Angeles.
But the city is simply too busy grinding out product to trumpet its importance. You can see the evidence everywhere.

Directly across from our berth in San Pedro is a warehouse with one of its ends blown off. You’ll see how it got blown off when you watch the last Schwarzenegger movie. Just down the channel, Jack Sparrow’s Black Pearl broods darkly among the container ships, a pirate ship that looks like a 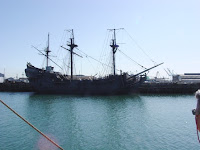 pirate ship only in a general way: Actual workmen built the ship from the keel to the crosstrees and digital imagery supplied everything above that.

Two of our maintenance days aboard Exy were disturbed by teams of men rappelling from helicopters above a nearby wharf. In the climactic scene of the next Die Hard, look for bewildered figures on the tall ship in the background, their paint brushes arrested in mid stroke.

The place abides in ambiguous reality. It’s strange to realize that, as you watch Chaplin’s Great Dictator frothing and raving and climbing his arras, traffic was proceeding normally on La Brea Avenue 200 feet away.

Non self aggrandizing it may be, but the cultural references point to California more frequently than anywhere else on earth. It never rains in Southern California, so do you know the way to San Jose? Are you a Valley Girl or a little old lady from Pasadena? Is there a free wind blowing through your hair on Ventura Boulevard? Are you on the side of L.A. Law or L.A. Confidential?

You know the names of Oxnard, Beverly Hills and Long Beach, but can you point them out quickly on a map? Those places have very real substance. You can get in a car and drive from one of them to another.

All this I learned when Elaine, Exy Johnson’s new mate, took me on a drive through town in her very un-Californian beat-up Toyota. Together we 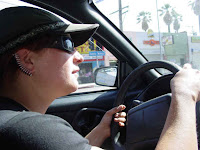 visited some of the places in Los Angeles that live in the collective imagination of the world.

Such as the Chaplin studios at 1416 La Brea Avenue. Just a few blocks parallel from Hollywood Boulevard and about a half mile from Hollywood and Vine (a corner, by the way, now devoid of all commercial life), the Chaplin Studios enrich about half a block with little buildings in the semblance of an English Village, all of them fronting the 10,000 square-foot sound stage.

Chaplin built this complex on land recently cleared of orange groves in 1917, and it remained his headquarters until he left the country in 1953. It housed the making of most of Chaplin’s great films, including two of my 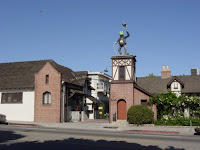 favorites, Modern Times and The Great Dictator. About 10 years ago Jim Henson’s company bought it, which explains the figure of Kermit the Frog dressed as The Little Tramp on one of the gateposts. It was also the headquarters of A & M Records and—but you can easily find a list of the great things that happened there at http://www.seeing-stars.com/Studios/ChaplinStudios.shtml.

We stop long enough at the building to perform the obligatory tourist motions—press face against gate, speak disarmingly to the guard, shoot pictures through gate, back away slowly. Elaine is happy to be doing something very Hollywood-focused that she wouldn’t do without someone to guide.

Elaine came to sailing ships by way of the theater arts and a brief stopover in office work. A stage rigger by trade, Elaine got into tall ships as relief from a busted romance and an employer who playfully held a loaded pistol to her head. This man was—still is—a giant in the movie animation world. When he put the gun to her head and asked who would possibly miss her if he pulled the trigger, Elaine beheld a change of career in prospect. Coming to Los Angeles was her first retreat from reality, she says. After the gun incident, she leaped the second: sailing aboard tall ships. The third she can’t yet foresee. But she lives in the right place to find it. What E. B. White said of luck and New York goes double for Los Angeles.

Our next stop: Hollywood Boulevard, so famous now as to be the very symbol of fame—also a necessary check on the tourist checklist. We park the car a block from the street and somehow it’s still amusing to realize you can reach this place by car rather than a puff of magic fairy dust. A few short steps and our feet are planted on the very substance of celebrity: The Walk of Fame on Hollywood Boulevard. 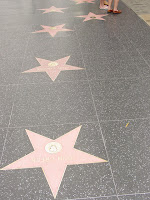 Fame comes in more flavors than even the entertainment business can encompass--unless Buzz Aldrin and Neil Armstrong count as popular entertainers. They have stars for being famous on TV.

The arbitrary sequence of names tends to conflate disparate brands and wattages of fame. Thus Arsenio Hall resides next to Marilyn Monroe, and John Lennon beside Mae West.

It’s possible some archiving system may soon be needed for the famous who have become, well, less famous: Mabel Normand? Dale Robertson? Sons of the Pioneers? Some stars seem to require an explanation why they should be there in the first place. I’m thinking here of Buck Owen.

Given our current rate of celebrity production—this year some 23 names will achieve immortality, including Michael Caine, Michelle Pfeiffer, Erik Estrada, Barbara Walters, Sean “Diddy” Combs and Lily Tomlin—the Walk will need to be extended up to and over the Hollywood hills.

The commerce along Hollywood Boulevard runs to the slinky lingerie and team-logoed sportswear end of the spectrum, the shops mostly small, the whole tone of the retail environment inclining a few degrees to the seedy. But they suit the local market. Every city has its freak street, the place where the dispossessed and outlandish go to flaunt their defiance. Most of these streets in America contain kids saturated with piercings and tattoos. In Hollywood it contains grown men dressed as Wookies. These characters lurk in front of the Kodak Theater, scene of so many Academy Awards ceremonies, and sidle up to passers-by and attempt to have their picture taken, after which comes the bite for a couple bucks. We walk briskly past them.

From Hollywood Boulevard it’s a short drive—in fact it’s only a moderate walk, but let’s take the car—to a close view of one of the world’s best-known images, the Hollywood Sign on the shoulder of Mt. Cahuenga.

Built for $21,000 as an advertisement, the nine letters of the sign stand 30 feet wide and 50 feet tall, built of metal scaffolding, wires and utility poles. It originally read Hollywoodland, the full name of the housing development beneath it. It also originally enlivened the California night with a three-part blinking sequence, HOLLY, WOOD, LAND. The builders planned to take it down after a year and a half. But fortune intervened.

We wanted to hike up behind the letters on one of the trails of the state park that now houses the sign. But then we realized the park closed in half an hour.

However, we manage to drive close. Nearing the sign, ever nearer, on

Beachwood Drive, which offers the closest approach, you can’t help but feel the power of it: the cynosure of billions, this beacon ablaze with promise. Give me your dreamy, your ambitious, your workday routine yearning to race across the sky. Its greatness rays filter down through the trees and lay a cover of stardust perhaps an inch thick.

Somehow just looking at it doesn’t satisfy the urge to know it, understand it, dwell with it. You need to keep watch over it constantly. I suggest using some of security cameras feeding to the web, http://www.hollywoodsign.org/247.html.

As we shift through the streets, another strange and unexpected thing appears in our windshield, this one what you might call secretly famous: the original Hollywoodland Realty Office, at 2700 North Beachwood Drive. 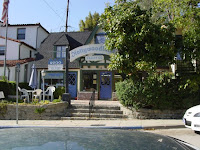 The little building sits enshaded among old trees and resembles, like the Chaplin buildings, an English country cottage, though the developers aimed at a more generalized quaint European village look. Built in 1923, the building anchored the development effort of the Hollywoodland tract, a 500-acre subdivision to be built on a former ranch. It was the reason the Hollywood sign was built.

Most of the houses from the original development are still here. And they have housed their share of celebrities—scarcely a location in Los Angeles 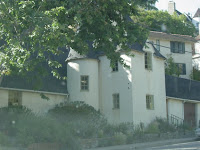 
We’re spending daylight in vast amounts. I make one last request: I want to see a beach. We head for Santa Monica.

Santa Monica really throbs on the several streets closest to the beach—the beach which seems to exist only as an ornament: I have yet to see crowds on any beach in Los Angeles. Citizens of the walk stroll and sport among the more elegant and “exclusive” shops of the town—not a tattoo or lingerie joint in sight. A pedestrian-only street, one of the few I’ve seen not killed outright by the exclusion of automobiles, contains street entertainers in plenty (yearly permit: $25), and people I could easily imagine to be film or music VIP’s now enjoying sport-shirt time with the family. Most of these people look rich and relaxed, even the kids.

Our walk takes us from one end of the street to another, passing gymnasts, comics, miscellaneous entertaining persons and, finally, dancers. Except these are not performers dancing for an audience. These are the pedestrians of the street pulled into several circles featuring a different style of dance in each: bossa nova, ballroom, freelance jazz. A set of music 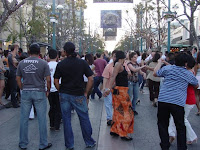 ends and another begins, and the dancing style changes to merengue, waltz and fandango. Twilight is falling and Santa Monica is dancing.

It’s this image that sticks in memory as the daylight finally drains away and the almost brighter lights of the storefronts take over. Elaine and I choose a restaurant on the strength of a tall ship pictured on its menu, and settle in to a single beer each. Tomorrow we go back to work on our tall ship, our small bit of fantasy in this town devoted completely to it. 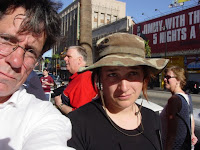