A Ponderous Chain in Philadelphia 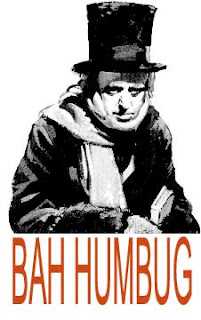 "The gentlemen from Philabundance, Mr. Scrooge."

"They've been cleared by public relations?" he demanded of the intercom.

"Let them in," he growled. "But mind, an urgent call in three minutes if they're not gone."

His secretary understood. Scrooge sat up straight and adjusted his Hermes tie.

The door opened. They were two portly gentlemen, pleasant to behold, who now stood, with their hats off, in Scrooge's office. They had books and papers in their hands, and bowed to him. There was no doubt which partner they beheld, Scrooge or Marley, for the trade magazines had carried ample notice of Marley's death in the crash of his Lear jet, seven years ago this very night. Still, as one said, approaching Scrooge's darkwood desk over the vast carpet, they were sure Marley's liberality was well represented in the surviving partner.

And about that he was right, for Scrooge and Marley had been kindred spirits. Oh! But he was a tight-fisted hand at the grindstone. Scrooge! He had all but levitated himself through mid-level management to partnership by generating greater output at lower cost through advanced software. Not a department posted production numbers but Scrooge's numbers beat them, and with a smaller personnel budget and lower overhead generally, especially in regard to health benefits. He inaugurated the era of major capital improvements to replace the expense of labor; and without anyone's seeing it, the average work week had lengthened. To those who spoke of overtime pay, he predicted it would be necessary for them to part--those who didn't part anyway as a consequence of restructuring. He was effective, efficient, conversant to the gills on employment law and raking in stock options. There was talk of a Peter Binzen profile in the Inquirer, or even a fawning interview by Ted Beitchman in The Player.

A smile oiled itself over Scrooge's face.

"Gentlemen," he said. "Are there not unemployment offices?"

"There are," said the gentleman.

"The welfare and food stamp programs still in their former vigor?"

"They survive," said the man, "though greatly weakened. I wish I could report otherwise."

"That is gratifying news," said Scrooge, in his concerned businessman's voice. "I was afraid from what you said that something had happened to stop them in their useful course."

"Under the impression," he said, "that they scarcely furnish Christian cheer of mind or body to the multitude, a few of us are endeavoring to raise--"

But Scrooge, in an unaccustomed show of impatience, raised his hand.

"Gentlemen," he said. His words were firm and even, and came from an Andrew Cassell column on techniques for better management.

"As you know," he said, "Scrooge and Marley is a publicly-traded company. Which means that I am answerable to a higher power even than myself." He laughed faintly at this old joke, as he had a dozen times before.

"None of us wishes for such austerity in daily business," Scrooge said. "If I had it my way, everyone who goes about with Merry Christmas on his lips would receive a cup of warm pudding and a holly branch. But, sirs, we must deal with facts. The Asian economies rise, the price of goods plummets, the Dow is retrenching. Consumers aren't consuming, not even at Christmas. Competition is keen. And all the while, labor costs increase, and on Wall Street they can think of nothing better to do than fling mashed potatoes at each other.

"And city government...." Here Scrooge rolled his eyes vaguely, and took a deep breath to calm himself. "Our government simply hopes to tax us to tiny bits."

He shrugged his shoulders to ask what he could do.

"I'm sure you'll find that Scrooge and Marley's contribution to the programs I mentioned is substantial. As I say, none of us wishes for austerity. But my stockholders, you understand. If they caught wind that I had upset their expectations of return, by even the tiniest degree--why, if they heard of that you would now be speaking to Scrooge's ghost and not Scrooge."

The gentleman began to speak, but Scrooge continued.

"Scrooge and Marley has done business in Philadelphia for 40 years," he oozed. "In the past the relationship has proved amiable and productive. I would hate to think that this fair city had become more hostile to our business than, say, Horsham or Great Valley or King of Prussia."

The gentleman again began to speak. But just at that moment the secretary buzzed with an important call for Scrooge, and the men were bidden to depart.

Scrooge took his usual melancholy dinner at the Union League, then drove home to his monstrous mansion in Gladwyne. There, he locked all the locks and armed all the alarms, and sat ensconced within, solitary as an oyster. Before retiring, he punched in his personal computer and noted with relief that the Dow was up 63 points, the dollar had advanced against the yen, the prime rate was steady, and the National Park Service had given preliminary approval to his bid to convert the money-losing Independence Hall into a casino and entertainment complex. Then he went to bed and slept as peacefully as ever. 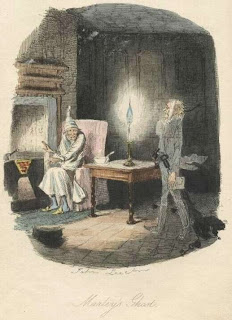 Posted by The Fighting Shy at 2:20 PM No comments:

I Read a Book and Get Retrospectively Creeped Out

I got stupid lost in the library again, this time looking for the oversized biography section, which is not, as it sounds, the section devoted to notable fat people.

I never did find the oversized section—never got near the B’s (for Bligh, William)—but a book in the W’s froze me.

I had a philosophy professor who liked to say there was nothing perfect in the world, no living Platonic ideal anywhere in the world--except Natalie Wood. And we always laughed. Because to have Natalie Wood show up in the middle of discussion on Plato’s pure forms blew up our notion of scholarly rigor. She appeared more than once in Jack Whitcraft’s lectures, always as the one indisputably pure and beautiful thing on the planet. 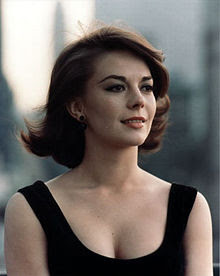 But Natalie’s shown up frequently on bookshelves in the last 10 years, and will no doubt show up more, as her various friends and husbands die off, and speculation flares anew on the circumstances of her death.

Wood drowned after apparently falling from the boat she owned with her husband, Robert Wagner, off Catalina Island in November, 1981. Also aboard was the actor Christopher Walken and Wagner’s hired captain.

Everyone had been drinking heavily that night, first on the boat, then on shore, then on the boat again. Around midnight Walken and Wagner got into a fiery argument and Natalie left them to go to bed. About an hour later, they couldn’t find her aboard, nor could they find the boat’s dinghy.

Those aboard first believed she’d taken the dinghy out for a ride, though upon consideration realized it was unlikely a drunk woman, who didn’t like the little boat anyway, would take such a jaunt on a dark, cold, windy night on rough seas. They called the Coast Guard.

Next morning searchers found the dinghy in a little cave on the rocky coast. And then they found her, about 100 yards away. She was suspended in the water beneath her red quilted jacket, which held some air and prevented her from sinking. Underneath the jacket she was wearing her nightgown. She hung in almost a standing position, head down, eyes open.

Of course the story exploded into a tale of scandal, conspiracy, cover-up. Wagner had thrown her overboard in a jealous convulsion for her attention to Walken. She had stumbled into a stateroom to surprise Wagner and Walken together. She possessed embarrassing information on both men, who staged a loud argument to mask their joint guilt in killing her. The forensic evidence supported none of this.

What probably happened, of course, was she fell overboard while adjusting the line holding the dinghy to the boat’s stern. Anyone familiar with boats knows you spend a large part of your night quashing this or that little noise so you can sleep. Night-time dinghy bumping is the number one cause of insanity among boat owners. And that particular dinghy had a history of bumping.

She was probably shortening the line when she fell in, probably held on to the little boat as long as she could, and then succumbed to hypothermia. A very sad story.

Well, it never occurred to me while sailing off Catalina that I might visit the spot of a notorious death. I had heard Wood’s name in connection with Catalina, when I worked in California; had heard she drowned somewhere around there. But it wasn’t until I opened her biography today that I knew exactly where.

Indeed, there in vivid description was Two Harbors, a place I know well, a ramshackle outpost 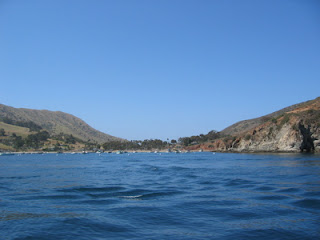 on far side of the island that then, as now, contains only one restaurant. It was where she ate her last meal. And there was the description of the anchorage where they had moored their big boat, exactly where Exy and Irving always anchor to give the kids a swim.

There in description was the little dock I knew, where they had pulled her out. And there in a photograph was the very cave I had kayaked through with my kids, a long tunnel open to the ocean at both ends that always got them enthused. It was in this cave they found the dinghy.

So in other words we had all been playing right where she died. We’d been swimming where her body spent a night almost floating.

I’m glad I didn’t know this then. I wish I didn’t know it now. But it only goes to show you, don’t go into the library without a deliberate plan.

It reminds me of the time that the great David Vis and I climbed to the top of a hilltop village in Spain, only to find that what looked like Moorish fortress was in fact a great crypt, which, furthermore, had—

No, skip that. I’m creeped enough for the time being. Maybe one day all these macabre stories from the road will go into a book and I’ll be finished with them (possible title, “Travels With Ghoulie” --apologies to John Steinbeck and his dog.) Until then I want to concentrate on the living.
Posted by The Fighting Shy at 5:13 PM 4 comments: