As you arrive over the last little swale into the mountain town, 1875 is suddenly spread out before you, like a late chromo of Currier and Ives, if Currier and Ives had been western prospectors: Long wooden sidewalks, their planks athwart the now-invisible muddy trenches, covered with sloping roofs to make a long colonnade down both sides of the street. Big airy rooms inside grand picture windows, with high patterned ceilings and chandeliers of tinted glass, a flamboyant saloon every 50 running feet, gaudy storefronts emblazoned in the grandiose lettering of the gold rush.


And it’s true you get howdy’s from folks in the street, from folks who probably have a right to say howdy, and wear cowboy hats and dungarees, though stricter gun laws won’t allow the revolver at the side, which would complete the picture. And, oh yes, it’s true that Virginia City plays the part of the wild west mining town, wild in action and wild in speculation, the greatest American boom town of the 1870s, to perfection for the tourists.


But a great deal remains unexplained.


Lookit. Here’s a town lodged high on a mountainside, away above the clouds, like Machu Picchu or Shangri-La, connected to the outside world by a couple of steep grades almost useless in the winter, occupying its own atmosphere. It’s one of those places where the meridians cross or the vibrations resonate or the chakras align, or however you might want to account for the fact that people arrive here and their eyes go wide and they settle down in an old shack or a hut and go to work in the library and depart nevermore.


Perfect example: Diamond Jim, manning the Visitor Center desk most days of the week, came here after a double homicide next door in Stockton California persuaded him it was time to leave. Ditto Terry down at the Silver Queen Hotel, who also came from California but without a double murder for persuasion.


Something cozy, something close. Like the wooden sidewalks and their covering of roofs. Or the narrowness of the street. Or the compactness of the locale, its size constrained by the rakish angle of the earth at this spot. Or the isolation of being alone on a mountainside with the world far below, the all-for-one-and-one-for-all of an exclusive commonwealth whose membership requirement is only that pair of wide eyes. 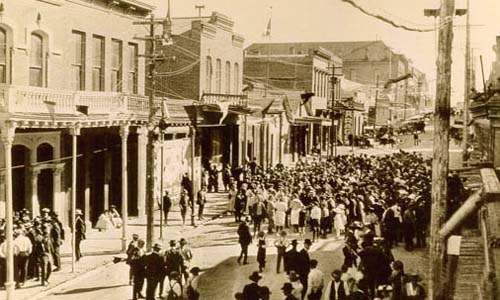 Oh yes, there is history. One of the great silver strikes of the world took place on this spot, the Comstock Lode, discovered in 1859 and not entirely mined out yet. Remember the Hearsts, as in William Randolph? That fortune started here. Ever heard of San Francisco? The money made here largely built it, and then rebuilt it after the earthquake. Do you know the state of Nevada? Statehood arrived soon after Virginia opened its first saloon, and largely because of the money here.


And there is fame, yes, there is fame. Step right up to the curb in the Crystal Bar saloon and view the tourist brochures mounted on the very wood where George Hearst, Dan DeQuille, Joe Goodman and Sam Clemens all contemplated the first happy drinks of the evening. Across the street is the office of the Territorial Enterprise, at one time the most influential paper in the west, where most of these gentlemen worked. Clemens devoted a big part of a later book to life in boomtown Virginia in the early 60s, when mining shares were trading like quarters and a chance encounter in the street could make you rich.


But the place has other sorts of appeal.


In the current office of the Territorial Enterprise, for example, you will find scaling the north wall a pair of parallel panels and the remnants of a pulley system. These are all that is left of the dumb waiter that for many years moved copy, printing plates, galley proofs, and probably whiskey among the three floors of the building. The foot of this dumb waiter resides in the basement, among artifacts of the small Mark Twain museum and the ancient printing press, still anchored like grim death in the bedrock of the basement floor.


It is this dumb waiter that lets all the ghosts in.


Ghosts, spirits, phantomlike entities, ectoplasmic exhalations, whatever you might want to call them, and whatever might be their provenance: Ghosts invest the town as thoroughly as any deluge of tourists. It is thought—at least by the ghost hunter TV shows that have made this place a favorite—that the dumb waiter is their portal.


Well, for some of them, perhaps. It depends what kind of ghosts you’re talking about. Clearly the portal would be handy for the dozens of miners still lying in the 750 miles of mine tunnel beneath the town. But you must assume that many of the ghosts, like their living co-inhabitants, just found a place in town they liked and settled down.


The Washoe Club, the most haunted place in town, during the silver boom the home of the Millionaires Club, now boasts a museum devoted to many of the ghosts who apparently do not commute from below but who live in the building year round. The ghost of the prostitute in the Silver Queen Hotel clearly needs no portal from the underworld, but can remain cozy and ensconced in the room where she killed herself, and never trouble to leave the building.


None of the spirits in the Washoe Club travel so very far outside their domain, though they do remain quiet for long periods. Perhaps the museum now devoted to them gratifies their ghostly egos enough that they need not stir nor rattle nor shake but for part of the year, and can kick back all the rest of it.


Spirits or humans, ectoplasm or protoplasm, long-term resident or recent arrival, there is an agreement here that life should pause for a while and progress no further. And so far it has kept the spirits of all worlds content. 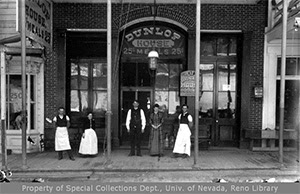 Posted by The Fighting Shy at 7:35 AM No comments: