Last Monday at 4 p.m., Jack, Maxine, my friend Sue and I went across the street to the courthouse where yet two more Maxine Sweeney portraits were adding to the corridors of Elizabeth City immortals. Courtroom A was filled with lawyers, clerks, secretaries, judges, awesomeness, and us four.
The judge called everyone to order, saying this was a ceremonial session and we could shoot cameras if we wanted, though I hadn't waited. He introduced a district attorney who got up and spoke at length about the greatness, the humanity, the forebearance and great heaps of principal possessed by the one judge being honored, who then came up and spoke awhile.
Then another district attorney did the same for another judge, who then came up and spoke awhile. 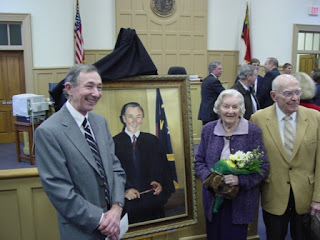 Then the second district attorney noted that all the paintings in the room had been painted by Maxine Sweeney, who was with us today, and he nodded toward her, and Aunt Maxine stood up and acknowledged the applause, which was good improvisation, as she'd spent most of the day cussing out her new hearing aid and had turned it off. He noted also that her husband John did the framing.
Then the draperies were tugged delicately from the faces of the new portraits, and judges Beaman and Small blazed forth in magnificent visage, with bright delectations of sunlight falling upon them like the glory of sublime justice, and so forth, and immediately court was adjourned and everyone ran for the bar.The local paper ran it front page next day:
http://www.dailyadvance.com/local/content/news/stories/2008/01/29/0129portraitsDM.html
and Aunt Maxine is expecting to get work from it. One very nice lady approached her who needed a picture repaired, and Aunt Maxine later told me the lady would buy a pastel. I said, oh, she didn't want a picture repaired? And Maxine said, oh yes, she wants that, too, but she'll also wind up buying a pastel. She just doesn't know it yet.
It's no surprise to me my Aunt Renoir makes a living doing this.
Posted by The Fighting Shy at 12:20 PM 1 comment: