About 20 miles into Sequoia National Park you get to the actual giant trees—the park contains many other marvels of nature—and here things get strange: Trees 90 and 100 feet around, nearly 300 feet high, begin to fill in around you. And then more. And around the corner, more. A forest of giants, primeval titans, and you are a bug.

For a while you take it calmly. But finally it escapes you, that feeling of immensity and wonder that can only find expression in really bad language. “Will you look at the size of these goshdarn trees,” you say, only with a much stronger adjective.

We came to Sequioa when a voyage got cancelled. Captain Mike suggested the trip. After exhausting ourselves with sailing for several weeks, a chance to exhaust ourselves with hiking sounded like a nice change. And so we went: Captain Mike, Laura, A.J., Deon, Brett and me, in two cars and a motorcycle, with about 60 pounds of LAMI food.

Once inside the park, five hours later, we began to climb, leaving the tamped down sole of valley behind, the devil’s footprint that makes a hell of sun on the flatland below. The mountains stand up to you like a wall, and once emplaced among them, the faces of rock become steeper and fiercer, and though you don’t always notice the climb, yet at each turn of your highway the chasm is more frowning and somber.

At every overlook the eyes behold what the mind does not comprehend, a vast canyon of space with the rock faces purpled by distance, and the tiny road by which you have come threading into the unseen recesses below, and emerging again from beneath the rocky outcrops, the connifers in sentinel ranks along the ridges, in the higher places on a groundnote of snowy white.

We did a lot of standing and staring and evaluating the abyss thoughtfully. Several times we resembled an album cover for one of the bands that A.J. is forever making up. The road twisted up and up, and you could look out for miles and see not a single billboard. Which is a shame, really. Just a few apartment subdivisions and luxury condos in this canyon would put thousands of upscale eyeballs in view of unmeasurable messaging opportunity. 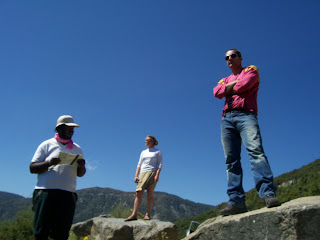 And even more so at Moro Rock. God knows what the ancient inhabitants made of this great granite dome rising more than 7000 feet off the valley floor, to brood titanically at the ceiling of heaven. One takes not a single step here without getting the double sense that 1. every inch of this ground is somehow sacred—even the stairway is on the National Register--and 2. perhaps you shouldn’t have eaten the extra pancakes this morning.

Our party tripped happily from its caravan toward the foot of the climb and found themselves not much later tripping awkwardly up the incline. And then trudging up. And then crawling up. Way stations with lookouts and benches strewed the way, and upon these sat the upward bound, lapsed now into attitudes of concern and self-searching. The downward bound didn’t stop. They wore faces of relief.

The top, though, is the paramountcy that meets every expectation of the hard climb: a rocky balcony looming Olympian over the insignificant haunts of men, and even the ravens and falcons gliding below in their humbler sphere.

We teetered out along the fenced-in walkway at the top, out to the end of the rectangular space where a bit of hurricane fence stands between you and a thousand foot drop. And once out there, at one with the blue empyeran, at home in the wild blue yonder, you really want to try to spit or drop a water balloon or something. 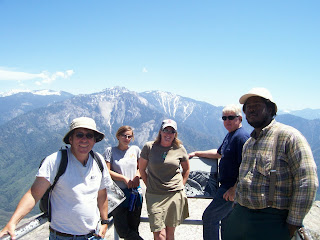 We made it back down, dazzled, confused, snow-blinded. And then came the trees.

Until recently, say 1 or 2 million years ago, trees like the Sierra Redwood occupied a vast range across what is now North America. But its range is now a micro-environment, an area of only a few hundred square miles on the western side of the Sierra Nevada mountains. There remain something over 70 groves of them, most under state or federal protection. Nothing seems to hurt these trees but the potential for toppling—and of course the lumber industry.

Possibly they still exist only because their wood, though strong and long-lived, is brittle. Measured by the volume of their boughs, they are the largest trees in the world.

Possibly they also exist because it’s a kick , when one of them falls over, to drive your car along it, or through it, as visitors to the park sometimes do.

This particular grove contains several trees now famous, including the largest tree in the world, the General Sherman. General Sherman measures 101.5 feet around its base, is 272.4 feet tall, and weighs somewhere around 6,167 tons. But the numbers don’t capture it. What almost captures it is what comes out of you mouth when you see it: Will you look at the size of that goshdarn tree. 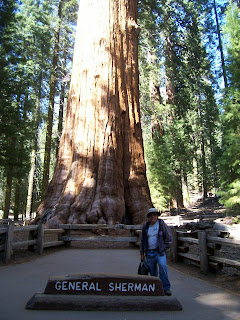 We rested that night in Grants Grove, one of the subaltern centers of park life, containing a general store and lodge, and surrounded by campgrounds. We passed most of the time eating, throwing a light-up Frisbee in the darkness, and trying various ways to set up Captain Mike’s tent. Expired PFD chemical lights helped us locate each other in the gloom. 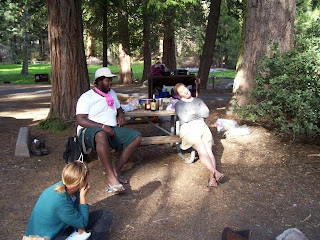 If there is a more vital dose of life than camping in chilled air among primordial magnificence I have yet to hear about it. Camping anywhere is probably a good thing. But camping amid the solemness and majesty and mystery of thousand-year-old trees must take the prize. The sun falls on a skyline burning with the orange glow of prehistoric wonder, the ranks and ranks of trees stretching away into the distance, and the slowly gathering night of jewelled stars and velvet sky, the smells of pine and cypress mingling with the campfire tang, and far off the calling of strange woodland birds.

To enter into this wilderness is to step back to an age that well antedates American, that fully precedes Europe, that came long before the modern form of human being, indeed, some one or two million years. One gets a picture of slow moving development in this corner of the world, as if, whether it raged elsewhere in violence or not, whether it really ever did favor the fiercest in other theaters of its operation, here at least the triumph belonged to the slowest and most enduring.

Next morning we piled into the automobiles again and began the long climb to the top of King’s Canyon, leaving behind all things mortal and ground-dwelling.

In King’s Canyon, as in Sequoia, time spent itself in geologic increments--millions of years, rather than the miniscule thousands by which humans measure their achievements. The automobiles climbed, climbed, nearly 9,000 feet. While climbing we sailors—water creatures, you know—had the satisfaction of seeing a mighty river next to us and not being on it.

There are numbered categories of rapids that river kayakers use to rate the “technicality” of their chosen river—in other words the likelihood of their being capsized while paddling, and thrust against rocks and split open, and drowned in whirlpools, and other such entertainments. But there was no category to describe the Godless and Rock Shivering Sluice of Death raging beside our highway. 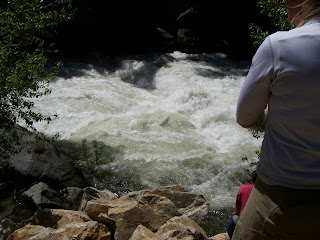 For miles we watched to see a place where the violence of the water abated, and watched in vain. We saw not one 50-foot stretch in those many miles that did not roar and surge with several different varieties of watery obliteration: boulders, whirlpools, waterfalls, foaming surges, cliffs. If you can imagine three different category-five rapids all fed together and then angled 20 degrees higher, you will have something like it. The many torrents were remarkable in having almost no bearing on the general direction of the river, but all sped different ways at once—some of them seemed to go backward--and the steep walls of rock contained the disagreement.

Then soon enough we were at the top and then over into the other side, into King’s Canyon. At a certain point in the progress of the highway there, you reach a ranger station called Road’s End, and there is an excellent reason for this name. Whatever march that human progress has made up and into this valley is stopped dead at this point. What progress continues must be undertaken on foot, preferably foot shod in boot. 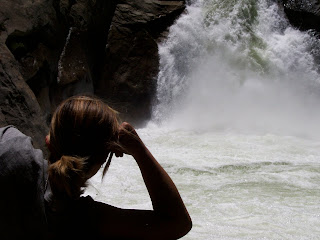 We exited the autos, checked our water, consulted maps, and then off through the valley of light walked the six sailors. The way led along a piney sand floor among cedars and pole oaks, with sheer rock cliffs of immense altitude added on either side of us to complete the geography. Some two miles out we reached a footbridge crossing this selfsame cataract of water and there we stood for a while, with some of us wanting to press further (you can probably guess who) and some of us remembering important tasks left undone back at the campsite.

I turned around to head back and Captain Mike soon overtook my retreat. Then Deon joined us. Then Brett. And finally Laura and A.J., the last to surrender the march, who bestrode that narrow wilderness like colossuses—colossae?—and scored the furthest progress of our quest.

That night, quiet rest. Next day, a group of French speaking people gathered behind Laura’s car to photograph her license plate (New York). Then, back to the water.